Are you searching for peace-of-mind for your equine’s digestive health? OPTI-GEST  has you covered with optimum levels of probiotics and prebiotics along with 11 specific protective ingredients to help protect both the front and hindgut digestive tract from colic, ulcers and acidosis. This is a cutting-edge, one-of-a-kind product for horse digestive health! Irrespective of price, there is nothing else even close to this one on the market.

OPTI-GEST Ulcer Relief is a one-of-a-kind supplement for horses to promote anti-colic, anti-ulcer, digestive and gut health. Containing five anti-acidosis ingredients, OPTI-GEST battles ulcers even before onset and also during the active state. You’ll see results in as little as 3 days, as supported by statements from Trainers, Veterinarians and Rehab Centers. OPTI-GEST Ulcer Relief horse supplement has been raved about as the best new horse supplement of the year for anti-colic, anti-ulcer and complete digestive and horse gut health formula.

OPTI-GEST contains six gut-soothing enzymes that work synergistically to achieve the most effective and quickest results.

Live Probiotics and Prebiotics help to improve the gut microbial landscape and counteract “bad” intestinal bacteria already present. The healthy “good” bacteria in the Probiotics and Prebiotics gobble up the “bad” bacteria in both the front and hindgut, as well as the entire digestive tract. This enhances results by allowing more effective bio-available nutrients to reach the cellular level. One-of-a-kind OPTI-GEST has been tested and praised by Trainers, Veterinarians and Rehab Centers, based on the results they’ve witnessed.

Every horse should be on this ulcer relief product that is prone to colic, under stress or is being hauled regularly. You will see an quick and noticeable difference in your horse. This next generation product has been described as an “insurance policy”, by our Veterinarian.

Each bag contains a scoop for easy measuring & supplement powder for appx 30 days (depending on dosage).

If you have many horses, try our OPTI-GEST™ barn bucket.

Glycine is an important amino acid for several reasons. It can support the liver and kidneys in removing potentially harmful toxins from the body‚ while also promoting cognitive health. Perhaps most essential is Glycine’s potential detoxification effects. The kidneys and liver are vital organs whose good functioning is essential to overall health. Both work to eliminate toxins from the body‚ which can be exposed to through the foods or the environment. Glycine can support their efforts by binding with toxic substances and making them harmless‚ allowing the body to excrete the toxins.

Kaolin is used as an aid in the treatment of non-infectious diarrhea in horses. Kaolin helps to prevent dehydration. It also absorbs and helps remove bacterial toxins and poisons from the intestinal tract. Kaolin can help relax and slow down the movement of inflamed intestines to normal rates.

Psyllium is a true dietary fiber, even though it is classified by some as a laxative or mucilaginous fiber, and is a convenient way to increase intake of dietary fiber because of its high mucilage content. This bulking agent swells considerably when added to liquid, which can help to support healthy gastrointestinal transit time. This bulking action and healthy transit time can play an important role in maintaining healthy gastrointestinal function.

Fenugreek, also referred to as Greek hay and Fenigreek, is an annual herb that derives from the Ukraine, India, China and the Mediterranean region. The ripe, dry seeds found in fenugreek possess protein, vitamins, niacin, potassium and disogenin. Fenugreek also contains alkaloids, lysine, L-tryptophan and steroidal saponins. Fenugreek is an over-the-counter supplement available in capsule, tincture and powder form. Multiple studies have indicated there are many health and cosmetic benefits to consuming fenugreek extract.

Beta-glucan is a substance found naturally in several foods, including oats, barley, and certain mushrooms. Also found in yeasts, beta-glucan is classified as a polysaccharide (a large molecule made up of multiple sugar molecules). There’s some evidence that beta-glucan may offer a number of health benefits, such as stimulation of the immune system.

Increasing the amount of fiber in your diet benefits your health in many ways. Fiber can be found in vegetables, fruits and whole grains. If you have trouble getting enough fiber in your diet, fiber supplements such as those containing psyllium or oat bran will increase your fiber intake, but you should talk to your doctor before consuming any sort of fiber supplement.

Amylase is the enzyme that helps the organism digest carbohydrates; therefore, without it the digestion process would become more difficult and may create health problems. It has been found to be useful for symptomatic relief from allergies and mild allergic reactions. In addition, Amylase has benefits from bloating or bowel yeast overgrowth due to poor starch digestion as it is the primary enzyme for digesting starch and sugar.

Protease (also known as a proteolytic enzyme, peptidase or proteinase) is a type of enzyme that functions mainly to help us digest different kinds of proteins. They break down the bonds by a process known as hydrolysis and convert proteins into smaller chains called peptides or even smaller units called amino acids.

Lipase is the fat-splitting enzyme. Lipase has vast importance for our health, not just in regard to the commonly recognized diseases of the fat metabolism such as overweight and underweight, cardiovascular disease, diabetes, strokes and degenerative muscle diseases, but also for skin problems, autoimmune diseases, cancer, degenerative diseases of the brain and nervous system, and also for rejuvenation and regeneration in general.

Good quality nutritional yeast is made from a single-celled organism of fungi called Saccharomyces Cerevisiae. In a controlled environment it is cultured and grown on molasses and then deactivated, harvested, washed and dried. Nutritional Yeast is beneficial because it adds stress-reducing B vitamins to the system. Nutritional yeast boasts trace minerals and, being a complete, bioavailability source of protein, contains all 18 amino acids. It is naturally free of dairy, soy, gluten and sugar, and contains no animal products. Nutritional yeast improves digestibility and absorption of minerals.

Lactobacillus acidophilus is a form of bacteria that’s found naturally in the body, usually in the intestines, mouth or female genitals. It’s considered beneficial to health because the bacteria doesn’t cause disease. It produces vitamin K as well as lactase, the enzyme that breaks down lactose (the sugars in milk products). This helpful bacterium is also a popular probiotic. Probiotics provide living bacteria that help the body absorb nutrients and keep a healthy balance of good bacteria.

Lactobacillus Casei is a beneficial bacterium that is found naturally in both the mouth and intestines. It produces lactic acid, which helps lower pH levels in the digestive system and impedes the growth of harmful bacteria. Lactobacillus Casei possesses beneficial properties that support health. It is able to improve and promote digestion. Some strains of the bacteria help control diarrhea, while other strains have an anti-inflammatory effect on the gut.

Streptococcus Thermophilus is a Gram-positive bacterium, which is also classified as a lactic acid bacterium. It is often found in fermented milk products such as yoghurt, cheeses and milk drinks. It is just one of the many beneficial bacteria that is added to food and drinks to enhance a person’s immune system functions and to help keep a healthy colon too.

The ability of Streptococcus Thermophilus to survive is simple; it has a thick cell wall that can help survive in extreme temperatures. Dairy products are heated for processing up to 100 degrees Celsius and these bacteria can withstand these extremes in temperature very well.

Bifidobacterium Longum is a specific species of microscopic non-pathogenic bacteria found naturally in the gastrointestinal tracts of horses. Bifidobacterium Longum provides many health benefits as a naturally occurring bacterium and as a probiotic. The lactic acid produced by the bacteria increases the acidity of the digestive tract, which helps inhibit the growth of harmful bacteria. Bifidobacterium longum also has been shown to treat constipation, reduce inflammation associated with inflammatory bowel conditions, prevent high cholesterol levels and reduce the development of certain allergies.

Brewer’s yeast is the dried, pulverized cells of Saccharomyces cerevisiae, a type of fungus, and is a rich source of B-complex vitamins, protein (providing all essential amino acids), and minerals, including a biologically active form of chromium known as glucose tolerance factor (GTF).

Natural and Artificial Flavors to increase palatability for horses

There are no reviews yet.

Be the first to review “OPTI-GEST™ Ulcer Relief” Cancel reply 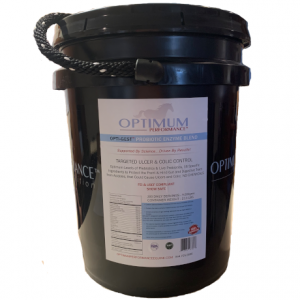 what are you looking for?